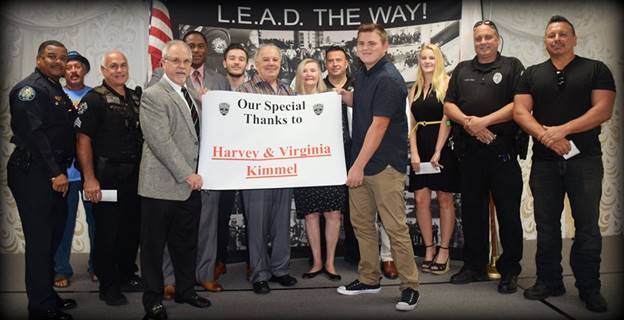 Harvey and Virginia Kimmel (center) being recognized by Perry Donfrancisco (left of banner), president of Delray Citizens for Delray Police. 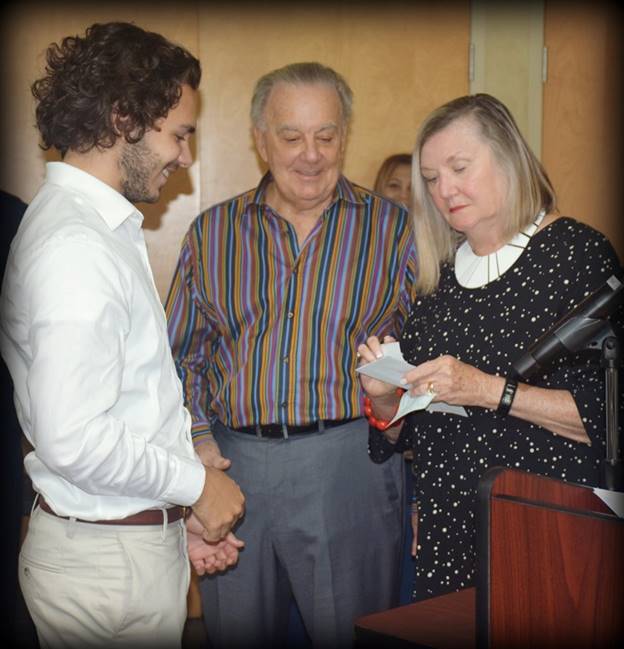 Harvey and Virginia Kimmel with one of the recipients for the scholarship fund.

Each student received a $700 scholarship award to help them in their educational pursuits, which include economics, exercise science, sports medicine, information and communications technology, political science and marine science.

“We are proud to be associated with Delray Citizens for Delray Police and to provide scholarship support to the families of the officers who serve our community in the most outstanding fashion,” said Harvey Kimmel.

The scholarships will send these recent high school grads to schools all over the state including Florida Gulf Coast, Florida State University, University of Florida, Florida Atlantic University and the University of Central Florida. Two students will be heading out of state to attend Piedmont College in Georgia and Rockford University in Illinois.

Other initiatives supported by the Kimmels include DBPD’s Annual Heroes & Helpers. A holiday event sponsored by Delray Citizens for Delray Police. Last year they paired 130 needy Delray Beach children with officers from the department and the Delray Beach Fire Rescue workers to go on a holiday shopping spree at Target. Each child received $100 to spend on gifts for their relatives and themselves.

For more than 30 years, Harvey and Virginia Kimmel have supported programs for students in the arts, education and culture in SouthFlorida, Pennsylvania and Michigan with a strategic, impact-based approach to charitable giving.

Recently, the couple was featured in a video produced by the Community Foundation for Palm Beach and Martin Counties. The video highlights not only their generous support but their hands-on involvement — their personal commitment to the organizations they support, including Milagro Center in Delray Beach, Arts Garage in Delray Beach and SouthTech Academy in Boynton Beach.

About the Virginia and Harvey Kimmel Family Fund:

For more than three decades, Delray Beach residents Virginia and Harvey Kimmel have been creating and supporting cultural arts and education programs for children and teens in South Florida, Pennsylvania and Michigan. Locally, they have supported several organizations, including The Virginia and Harvey Kimmel Milagro Junior Teen Center, an enrichment program for economically challenged children, and the Milagro Center Musical Instrument Program; The Lynda Hunter and Virginia Kimmel Children’s Library at the Delray Beach Public Library; The Symphonia in Boca Raton; and a summer camp program for the Arts Garage in Delray Beach.

For more information about the Kimmel video or the Virginia and Harvey Kimmel Family Fund of the Community Foundation of Palm Beach and Martin Counties, contact Andrew M. Rose at Rose Marcom LLC at andy@rosemarcom.com or (561) 945-9356.